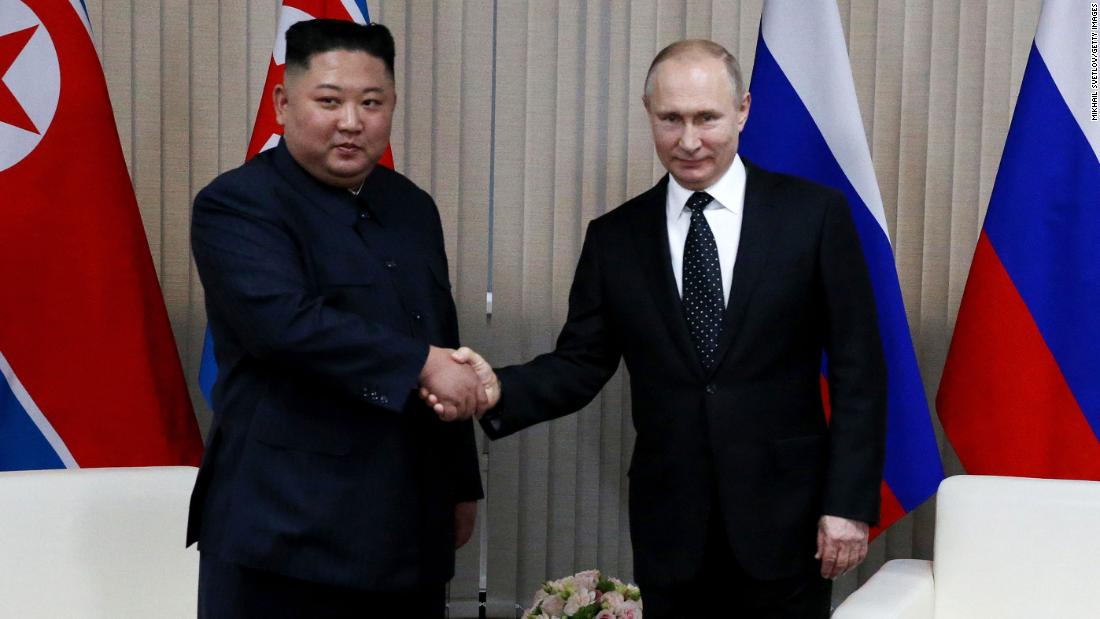 The purchase indicates that the Russian military continues to suffer from severe supply shortages in Ukraine, due in part to export controls and sanctions, according to the official.
The US expects Russia could try to buy more military equipment from North Korea going forward, the official added.
The New York Times first reported on the purchase. The two countries had formed relations through the Korean War of the 1950s, with the former Soviet Union having been a major benefactor to North Korea, financially propping the regime up. North Korea has blamed the US and the West for the war in Ukraine.
News of Moscow buying weaponry from North Korea follows a recent US assessment that Russia now possesses weapons-capable drones from Iran also likely for use in the war in Ukraine.
The US believes that Moscow officially purchased the Mohajer-6 and Shahed-series drones — the Shahed-129 and Shahed-191 — from Iran and transferred to Russia for use in the war in Ukraine. The drones are capable of carrying precision guided munitions and can be used for surveillance.
Russia has been looking to hamper Ukrainian military’s use of recently Western-supplied long-range precision artillery and rocket systems, including the High Mobility Artillery Rocket Systems (HIMARS), on the battlefield. With the HIMARS, Ukraine has been able to precisely target and hit Russian command posts, logistical hubs and ammunition dumps well beyond the front lines.
Defense Department press secretary Brig. Gen. Pat Ryder told reporters during a briefing at the Pentagon Tuesday that Russia has approached North Korea to “request ammunition.”
The request from Russia to North Korea is “indicative of the situation Russia finds itself in,” Ryder said.
“It does demonstrate and is indicative of the situation Russia finds itself in in terms of logistics and sustainment capabilities as it relates to Ukraine,” Ryder said. “We assess that things are not going well on that front for Russia, so the fact that they’re reaching out to North Korea is a sign that they’re having some challenges on the sustainment front.”

The availability of ammunition will prove to be one of the most critical factors in Russia’s ability to sustain its war in Ukraine, US officials told CNN. It has been difficult to assess Russia’s levels of ammunition throughout the war, sources said, but its purchase of supplies from North Korea could suggest some Russian stocks are running low. US intelligence officials also believe that the Russians are running short on artillery shells and rockets, amid their scorched-earth tactics of unleashing artillery barrages on Ukrainian cities over the last six months.
For now, though, the ammunition deficit does not appear particularly widespread, officials said. But it may be particularly acute for select types of high-caliber multiple launch rocket systems, low caliber artillery systems and precision guided weapons, said Michael Kofman, the director of the Russia Studies Program at the Center for Naval Analyses. Kofman added that it will take time for Russia to meaningfully ramp up its production to meet the high volume of ammunition expenditure in the war, which the Russian defense industry clearly did not anticipate.
In another signal that Moscow may be struggling to maintain the needed resources for its now six-month war, Russia has also been reallocating both manpower and equipment from far-flung military districts in both the east and the north, according to two sources familiar with US and western intelligence.
And Russia moved earlier this year to restrict public access to information about its budget, including import and export figures. According to one of these sources, that blackout is a key indicator that Russia has been forced to aggressively redirect funding and other resources towards the conflict — a fact that it would want to hide from its public. The Kremlin continues to insist that it is not waging a war, but only a limited “special military operation.”

CNN’s Ellie Kaufman and Veronica Stracqualursi contributed to this report.